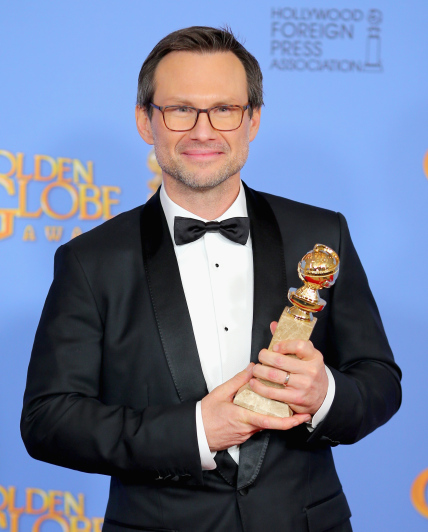 Christian Slater is an American actor. He made his film debut with a leading role in the 1985 film The Legend of Billie Jean. He played a monk's apprentice alongside Sean Connery in The Name of the Rose before gaining wider recognition for his breakthrough role in the cult film Heathers. Christian Michael Leonard Slater was born on August 18, 1969, in New York City, and attended Fiorello H. LaGuardia High School of Music & Art and Performing Arts. During the 1980s, Christian Slater emerged as one of film’s leading young actors. He also became somewhat notorious for his life off-screen. The son of an actor and a casting director, Slater landed his first acting job as a child, appearing on the soap opera One Life to Live. In the 1990s, Slater starred in many big budget films, including Robin Hood: Prince of Thieves, Interview with the Vampire: The Vampire Chronicles, Broken Arrow, and Hard Rain. He was also featured in the cult film True Romance. Since 2000, Slater has combined work in the film business with television, including appearances in The West Wing and Alias and starring in Breaking In and Mind Games. He currently stars as the title character on the USA Network series Mr. Robot, receiving his first Golden Globe nomination and win at the 73rd Golden Globe Awards. He co-stars in a television series on USA Network called Mr. Robot. Slater plays a computer hacker, "Mr. Robot," who recruits Rami Malek's character, 'Elliot," into Slater's band of hackers called fsociety. The series premiered on June 24, 2015. It was picked up for a second season.