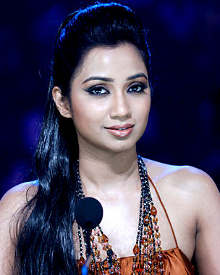 Shreya Ghoshal is an amazing Indian playback singer who mainly sings in Hindi films. She also sings for other languages like Telugu, Assamese, Bengali, Gujarati, Kannada, Malayalam, Marathi, Nepali, Oriya, Punjabi, and Tamil. Shreya Ghoshal was born on 12 March 1984 in Berhampore, West Bengal, India. She has studied upto eighth in Atomic Energy Central School, Rawatbhata. Later she shifted to Mumbai and continued her studies at the same school but in Anushaktinagar. She joined the Atomic Energy Junior College for to study science but discontinued and enrolled at the SIES College at Sion in Mumbai, where she took up arts with English as her major. Shreya at a very tender age of six started her trained in Hindustan Classical Gharana of music. She was trained in playback singing for about 18 months and then continued her classical music training in Mumbai. In 1995, she became the winner of the All India Light Vocal Music Competition in New Delhi. She made her first on screen appearance in "Awaz Nayi Andaz Wohi".

She has received four National Film Awards, five Filmfare Awards and eight Filmfare Awards South till date. She has recorded songs for film music in various Indian languages, and has established herself as a leading playback singer of Indian cinema. In 2016, she received the Best Female Playback Singer Filmfare Award for Deewani Mastani from Bajirao Mastani.