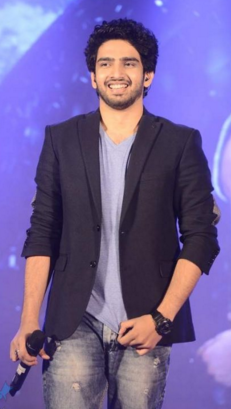 Amaal Malik is a music composer and playback singer in the Hindi film industry hailing from a musical family. He is the grandson of Sardar Malik; son of Daboo Malik and nephew of music composer Anu Malik. Amaal started learning music at the age of 8 and took a liking towards the piano. He debuted in 2014 with Salman Khan's Jai Ho, following it up with the song "Naina" from Sonam Kapoor and Fawad Khan Starrer Khoobsurat. Armaan Malik was born on 22 July 1995 in Mumbai, Maharashtra. Amaal Mallik did his studied from Jamnabai Narsee School and completed his graduation degree from N.M. College in Mumbai. He is also learnt Indian Classical Music from his grandson Sri Sardar Malik. He has started his music career in 2005 Hindi film Sarkar as an assistant music composer. Then he has worked with so many Hindi films as an assistant music composer such as Shootout at Lokhandwala (2007), Kisaan (2009). He was awarded the Best Music Director Filmfare Award in 2016.