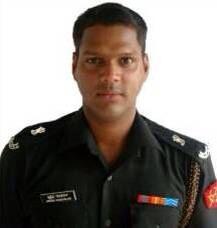 Major Mukund Varadarajan AC (12 April 1983 – 25 April 2014) was an officer in the Rajput Regiment of the Indian Army. In 2014, he was posthumously awarded the Ashok Chakra, India's highest peacetime gallantry award, for killing three terrorists in an encounter at the Shupiyan district of Jammu and Kashmir.