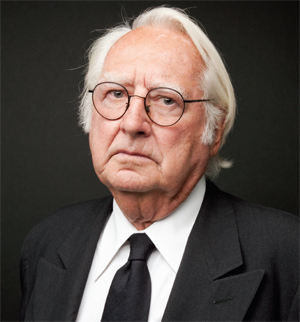 Richard Meier is an American abstract artist and architect, whose geometric designs make prominent use of the color white. A winner of the Pritzker Architecture Prize in 1984, some of his more iconic buildings include the Barcelona Museum of Contemporary Art and the Getty Center in Los Angeles. He was born on October 12, 1934 in Newark, New Jersey, United States. Meier graduated from Cornell University in Ithaca, N.Y. His early experience included work with the firm of Skidmore, Owings and Merrill in New York City and with Marcel Breuer, a noted exponent of the International style of architecture. In 1963 Meier formed his own firm. Early on he received critical acclaim for the Smith House (1965–67) in Darien, Conn., the first of his so-called white buildings, which clearly built upon the pristine Modernism of Le Corbusier’s work in the 1920s and ’30s. In 1997, Richard Meier received the AIA Gold Medal, the highest award from the American Institute of Architects, and, in the same year, the Praemium Imperiale from the Japanese government in recognition of lifetime achievement in the arts. . He is a Fellow of the Royal Institute of British Architects and the American Institute of Architects, and he received a Medal of Honor from the New York Chapter of the AIA in 1980 and a Gold Medal from the Los Angeles Chapter in 1998. His numerous awards include thirty National AIA Honor Awards and over fifty regional AIA Design Awards. In 1989, Richard Meier received the Royal Gold Medal from the Royal Institute of British Architects.