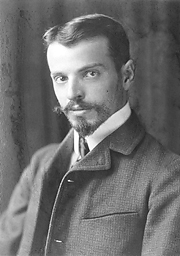 Paul Philippe Cret was a French-born Philadelphia architect and industrial designer. For more than thirty years, he taught a design studio in the Department of Architecture at the University of Pennsylvania. Paul Philippe Cret was born in Lyons, France, on October 23, 1876. He attended architecture school at the Ecole des Beaux-Arts in both Lyon and Paris. He had already won many architectural awards when he was recruited, at age twenty-seven, to teach architectural design at the University of Pennsylvania. In Philadelphia he served as Professor of Design at the University of Pennsylvania from 1903 until 1937. In 1931, the regents of The University of Texas at Austin commissioned Cret to design a master plan for the campus, and build the Beaux-Art Main Building (1934–37), the university's signature tower. Cret would go on to collaborate on about twenty buildings on the campus. In 1935, he was elected into the National Academy of Design as an Associate member, and became a full Academician in 1938. Cret's contributions to the railroad industry also included the design of the side fluting on the Burlington's Pioneer Zephyr (debuted in 1934) and the Santa Fe's Super Chief (1936) passenger cars. In 1938, he received the AIA Gold Medal.