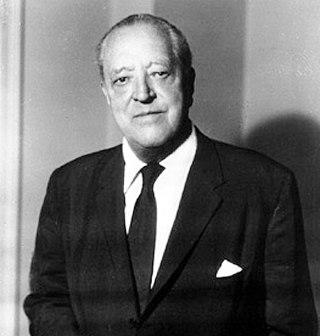 Ludwig Mies van der Rohe was a German-American architect. He was born on March 27, 1886 in Aachen, Germany. In 1905, at the age of 19, Mies went to work for an architect in Berlin, but he soon left his job to become an apprentice with Bruno Paul, a leading furniture designer who worked in the Art Nouveau style of the period. Two years later he received his first commission, a traditional suburban house. Its perfect execution so impressed Peter Behrens, then Germany’s most progressive architect, that he offered the 21-year-old Mies a job in his office, where, at about the same time, Walter Gropius and Le Corbusier were also just starting out. In 1960, he received the AIA Gold Medal.

Behrens was a leading member of the Deutscher Werkbund, and through him Mies established ties with this association of artists and craftsmen, which advocated “a marriage between art and technology.” The Werkbund’s members envisioned a new design tradition that would give form and meaning to machine-made things, including machine-made buildings. This new and “functional” design for the industrial age would then give birth to a Gesamtkultur, that is, a new universal culture in a totally reformed man-made environment. These ideas motivated the “modern” movement in architecture that would soon culminate in the so-called International Style of modern architecture. He died on August 17, 1969 in Chicago, Illinois, United States.