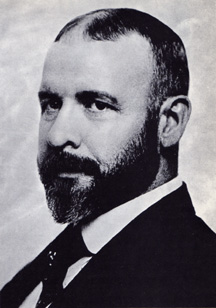 Louis Henry Sullivan was an American architect, and has been called the "father of skyscrapers" and "father of modernism". He was born on September 3, 1856 in Boston, Massachusetts, United States. He is considered by many as the creator of the modern skyscraper, was an influential architect and critic of the Chicago School, was a mentor to Frank Lloyd Wright, and an inspiration to the Chicago group of architects who have come to be known as the Prairie School. Along with Henry Hobson Richardson and Frank Lloyd Wright, Sullivan is one of "the recognized trinity of American architecture". "Form follows function" is attributed to him although he credited the origin of the concept to an ancient Roman architect. In 1944, he was the second architect in history to posthumously receive the AIA Gold Medal. Louis Sullivan’s architecture is a mixture of plain geometry and undisguised massing punctuated with elaborate pockets of ornamentation in stone, wood and terra cotta. Fragments of his ornamentation hang in some of the most prestigious museums in the world, including the Art Institute of Chicago, the Metropolitan Museum of Art and Museum of Modern Art in New York. He died in 1924, penniless and forgotten to the public, and was buried in Chicago’s Graceland Cemetery.