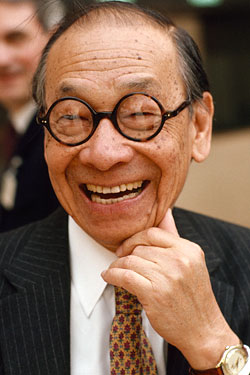 Ieoh Ming Pei commonly known as I. M. Pei, is a Chinese American architect. In 1948, Pei was recruited by New York real estate magnate William Zeckendorf. I. M. Pei was born in China on April 26, 1917. He returned to China for the first time in 1975 to design a hotel at Fragrant Hills, and designed Bank of China Tower, Hong Kong, a skyscraper in Hong Kong for the Bank of China fifteen years later. In the early 1980s, Pei was the focus of controversy when he designed a glass-and-steel pyramid for the Musée du Louvre in Paris. He later returned to the world of the arts by designing the Morton H. Meyerson Symphony Center in Dallas, the Miho Museum in Japan, the Suzhou Museum in Suzhou, and the Museum of Islamic Art in Qatar. Pei has won a wide variety of prizes and awards in the field of architecture, including the AIA Gold Medal in 1979, the first Praemium Imperiale for Architecture in 1989, and the Lifetime Achievement Award from the Cooper-Hewitt, National Design Museum in 2003. In 1983, he won the Pritzker Prize, sometimes called the Nobel Prize of architecture.