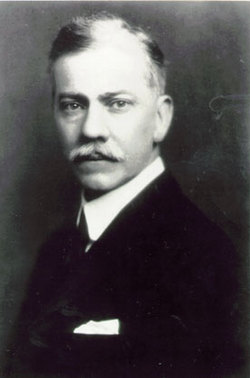 Henry Bacon was an American Beaux-Arts architect who is best remembered for the Lincoln Memorial in Washington, D.C., which was his final project. Architect Henry Bacon was born on November 28, 1866, in Watseka, Illinois. Bacon attended the Tileston School in Wilmington and then enrolled at the University of Illinois. After a year at college, however, he decided to take a hands-on approach to learning about architecture. Bacon eventually landed a job with the legendary firm of McKim, Mead and White in New York City. There he developed in an interest in the Beaux-Arts style. Bacon was very active as a designer of monuments and settings for public sculpture. He collaborated with the sculptors Augustus Saint-Gaudens and Daniel Chester French. It was the latter who carved the huge statue of Abraham Lincoln that sits within Bacon’s last and most famous work, the Lincoln Memorial. Bacon served as a member of the U.S. Commission of Fine Arts from 1921 until his death in 1924.[1][2] In May, 1923 President Warren G. Harding presented Bacon with the American Institute of Architects's Gold Medal, making him the 6th recipient of that honor. Bacon died of cancer in New York City, and is buried at Oakdale Cemetery in Wilmington, North Carolina.