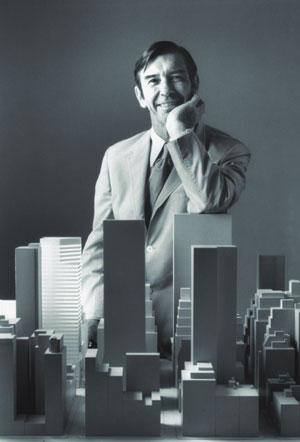 Edward Larrabee Barnes was an American architect. He was born on April 22, 1915 in Chicago, Illinois, United States. He graduated from Harvard in 1938 after studying English and Art History before switching to architecture, then taught at Milton Academy, before returning to Harvard for further studies under Walter Gropius and Marcel Breuer. He graduated from the Harvard Graduate School of Design in 1942 and served in the Navy during World War II. After the war he worked for Henry Dreyfuss in Los Angeles designing prototypes for mass-produced homes. He taught at Harvard University, the Pratt Institute, and the University of Virginia, and served as a member of the 'Urban Design Council of New York' and as vice-president of the American Academy in Rome. In 1969, Barnes was elected into the National Academy of Design as an Associate member, and became a full member in 1974. He was elected a Fellow of the American Academy of Arts and Sciences in 1978. In 2007 he was posthumously honored with the American Institute of Architects' highest award, the AIA Gold Medal. He also received the Thomas Jefferson Medal in Architecture, the Harvard University 350th Anniversary Medal, and some forty other awards. His Haystack Mountain School of Crafts won the AIA Twenty-five Year Award. He died in Cupertino, California.