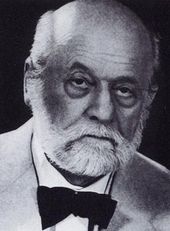 Auguste Perret was a French architect and a world leader and specialist in reinforced concrete construction. In 2005, his post-World War II reconstruction of Le Havre was declared by UNESCO one of the World Heritage Sites. He was born on February 12, 1874 in Ixelles, Belgium. Among Perret’s many notable buildings of the 1920s and 1930s was the École Normale de Musique in Paris (1929), considered by many to be an acoustical masterpiece. After World War II he was appointed chief architect for the reconstruction of Le Havre. Notable Perret buildings there are the Hôtel de Ville and the church of St. Joseph, both designed in 1950 and completed before his death. By that time his ideals were in sharp conflict with those of many of the younger architects who were less interested in the expression of structural systems than in the variety of spatial and sculptural effects made possible by reinforced concrete. From 1940 Perret taught at the École des Beaux-Arts. He won the Royal Gold Medal in 1948 and the AIA Gold Medal in 1952.