2013 2012 was again a year of new records for EUSA.
17 European Universities Championships were held across Europe, some in countries where EUSA events have not yet been organised. Moreover, the record number in participation has been recorded.The Assembly was held in Funchal/Madeira, Portugal and was preceded by an important Conference on university sport.
A Convention was organised for the Organisers of the 2nd European Universities Games, to take place in 2014.
EUSA continued its participation in European projects; officially concluding the Prevention of sexual violence in sports project and hosting the European Voluntary Service (EVS) volunteer in the office.
Partnerships with European Fair Play Movement (EFPM) )and European Habdball Federation (EHF) have been formalised, with more organisations to follow in the future.

2012 2012 was another important milestone in the history of EUSA.
It was the year when the 1st European Universities Games were organised – hosted in Cordoba, Spain. The event was very successful, with over 2500 participants, and included 10 sports in the EUSA programme.The Assembly was held in Maribor, Slovenia and elected a new Executive Committee, led by Mr Adam Roczek as the new President. Two new organisations/countries joined EUSA (Armenia and Liechtenstein), totalling the number of members to 45.EUSA successfully organised two Conventions – first in January for the Organisers of the EUSA Games and in November for the organisers of the 2013 European Universities Games.
The participation of EUSA in European projects continued; officially concluding the European Anti-Doping Initiative (EADIn), and being a part of the Prevention of sexual violence in sports project. In 2012, EUSA also officially became accredited for the European Commission’s Youth in Action programme of European Voluntary Service (EVS).

2011 2011 was another record-breaking year for EUSA. 16 European Universities Championships were organised in 15 cities in 13 European countries, also breaking the participation record with 3630 participants.
The General Assembly was held in Eilat, Israel, preceded by European University Sports Conference.
EUSA proved to be a successful and reliable partner of the European Anti-Doping Initiative (EADIn) and joined also the project Prevention of sexual violence in sports – Impulses for an open, secure and sound sporting environment in Europe. An extensive study on Gender equality in University Sports has been carried out and publicly presented, also in cooperation with FISU.
2010 After celebrating its 10th anniversary a year before, EUSA gained its own offices in Ljubljana, Slovenia in 2010. While the organisation is still based in Switzerland, the secretariat now has its own premises in Ljubljana, after being hosted by Slovenian University Sports Association and the University of Ljubljana for several years in the past.11 European Universities Championships were organised, with over 2700 participants attending them. An EUSA Cup in Billiards also took place in Estonia.Due to the change of fiscal year, correlating to the calendar year, the assembly was moved to March 2011.EUSA joined the European Anti-Doping Initiative (EADIn) as one of the core partners and attributed the organisation of the 1st European Universities Games for 2012 to Cordoba, Spain.EUSA acquired a new main sponsor – Asiana Airlines, with FISU being its strong partner.

2009 EUSA celebrated 10th anniversary, the main celebration was held at the General Assembly in Vienna, Austria. Special recognitions were awarded at the ocassion of 10th anniversary for achievements 1999-2009.15 European Universities Championships were organised, with Golf, Taekwondo and Bridge being added to the EUC list. The participation number reached 3000 student athletes, representing 417 universities from 32 countries.Unfortunately, 2009 was also marked by the death of one of the iniciators and the first President of the European University Sports Association, Mr Enno Harms.2008 11 European Universities Championships were organised with 29 European countries, representing 2800 participants and 280 university teams participating. Ukraine, Turkey and Ireland hosted the EUC for the first time.The 10th EUSA General Assembly took place in Paris, France.The Executive Committee was enlarged by two members.

2007 12 European Universities Championships were organised with over 2800 participants and 360 university teams from 33 countries.General Assembly was held in Belgrade / SRB.New board was elected for the next 4-year term. EUSA has today 40 members. Bosnia and Herzegovina and Belarus became new members, Denmark was suspended.
2006 Handball was added to the EUC programme.General Assembly in Valencia / ESP.Websites of EUSA and EUSA STC were redesigned, EUSA Forums additionally established.

2005 Rowing was added to the EUC programme.EUSA Symposium was held in Madeira / ESP. The next symposium will be in 2007.General Assembly in Wroclaw / POL.EUSA STC website was set up.Certificate of Academic Eligibility was standardised and is to be used an all subsequent EUSA sporting events.

2004 EUC in Badminton, Futsal and Beach-Volleyball were added to the sports programme – it is now comprised of 9 sports. The 3rd Symposium was held in Falun / SWE.In December, EUSA published the 1st EUSA Magazine.General Assembly in Nottingham / GBR.The GA adopted a series of amendments of the statutes. Among others the new position of a Treasurer and a non-voting, paid Secretary General was installed; the limitation for EC members to 3 terms (2 years) was removed.

2003 With Football (Rome) and Karate (Podgorica), 2 new sports had been added to the EUC. The second Syposium was held in Crete.Beginning in July, the first employee was hired in the office in Hanover.
General Assembly in Ljubljana / SLO.The number of EC members was increased from 9 to 11.

2001 The first EUC were organised in Basketball (Aveiro/POR) and Volleyball (Belgrade/YUG).
A first Symposium had to be cancelled because of the events of September 11th in New York.General Assembly in Amsterdam 5 more countries became members which totals the membership to 34.2000 General Assembly 2000 in Paris 4 more countries became members. The GA approved the introduction of European Championships based on University teams for 2001.

1999 Foundation in Vienna .The European University Sports Association (EUSA) is an organisation of the national university sports federations in Europe.It was founded in November 1999 in Vienna/Austria by 25 national federations.The Office is based in Hannover/Germany. 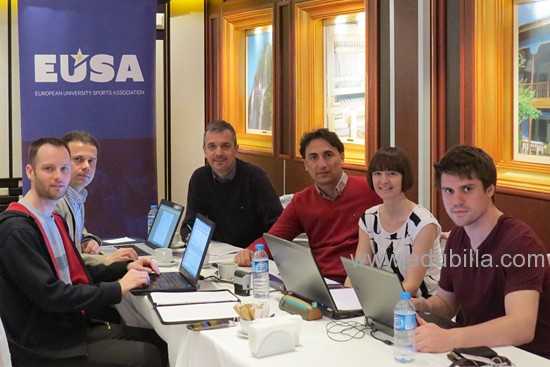 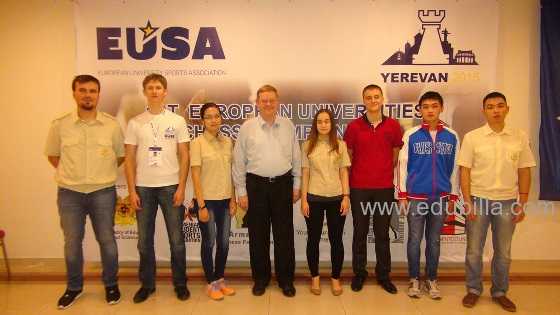 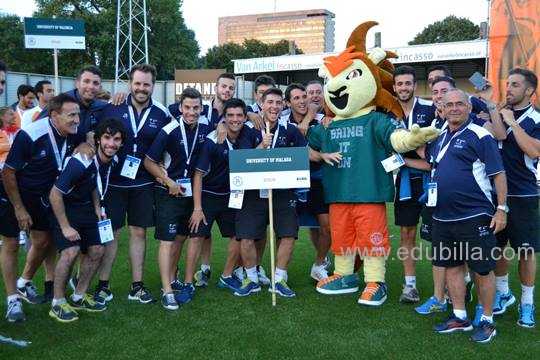 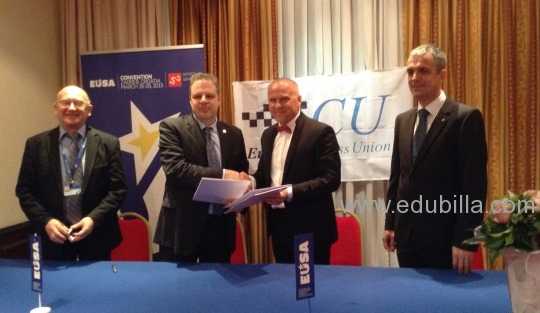