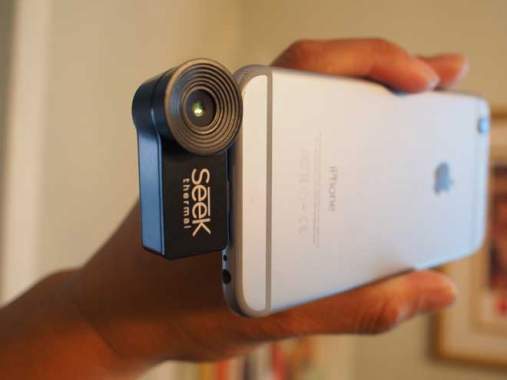 The Seek CompactPRO is a tiny gadget which turns your mobile phone camera into thermal imaging camera. The tiny device has to be plug into a charger port of smart phone. According to manufacturers, the Seek CompactPRO is the first add-on thermal camera with a 320 x 240 sensor array. It creates a pixels of 76800 which leads to analyse later with all temperature details. The Seek CompactPRO is nothing but an app, it can be downloaded from both iTunes and Google Play. Generally, the cost of thermal cameras are costly but the smart phones can be able to turn into thermal imaging camera under $500. Its much more affordable camera when compared to other thermal cameras. The thermal cameras are mostly required for experts and contractors in industrial and commercial building trades. This app helps to store the thermal images in the format of radiometric file format. It weighs less than half an ounce and also it helps in thermal readout from the add-on’s sensor from -40 to 625 degree Fahrenheit with sensitivity levels <70mK. It contains an adjustable focal lens which gives thermal cam a 320 field of view.

“The industrial and commercial segment has always been an important focus for our company. High performance thermal imaging tools used to be expensive, difficult to carry, and primarily used by few people in large industrial facilities,” said Tracy Benson, CMO/VP of Global Marketing for Seek Thermal. “It is one of the most important sensing technologies that can prevent costly damages, increase productivity, and help avoid dangerous situations in hundreds of applications. If we can make it more affordable to find problems faster and easier with high performance imaging quality in portable size devices, we are succeeding at our mission. Our aim is to fit everyone’s budget and put smart tools into the hands of more people who can really use it.” The latest version of Seek thermal camera provides higher resolution and smaller design but the cost is little bit higher.
Article posted by:
Arthi
Student
share