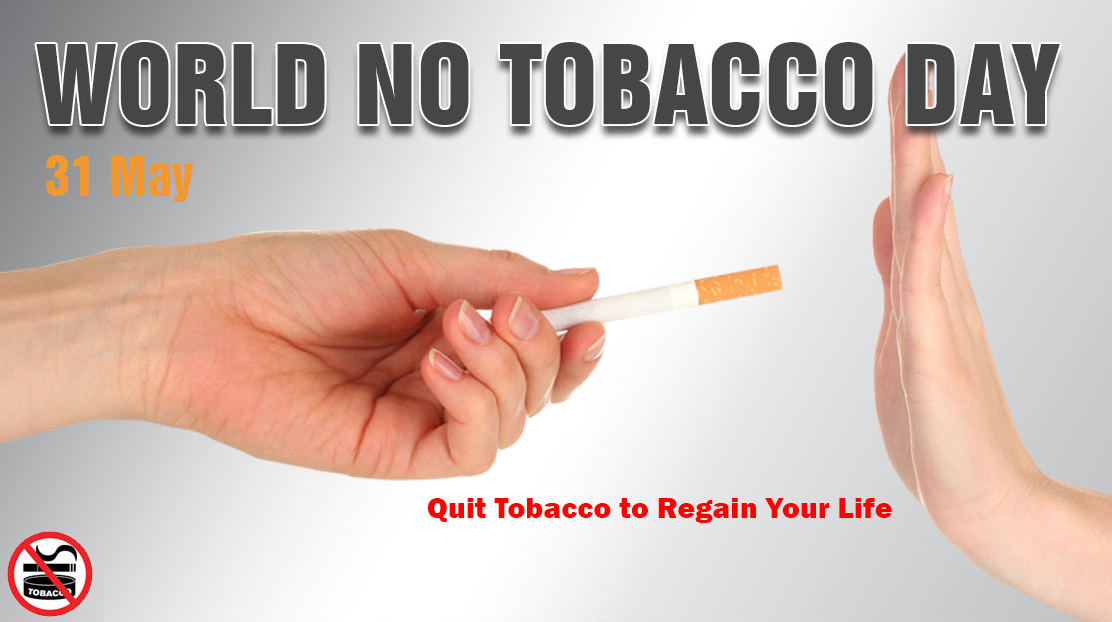 World No Tobacco Day (WNTD) is observed on May 31st of every Year. This day is observed in order create awareness about the health harming effects of tobacco among pupil to stop using tobacco.

Tobacco use is the leading preventable cause of death. Each year, it kills more than 5 million people. It is on track to kill more than 8 million by 2030, by which time approximately 80% of the deaths would occur in low- and middle-income countries.

The costs of tobacco use are measured in its enormous toll of disease, suffering and family distress. Economies also suffer from increased health-care costs and decreased productivity.

Today, we have a greater understanding of how to reduce the economic and health costs of this deadly epidemic. Such demand reduction policies as higher taxes and comprehensive bans on tobacco marketing and smoking in public places are among the principal cost-effective means to reduce tobacco use and its consequent harms to health and economic development.

Challenges in implementing effective tobacco control measures still exist and need to be addressed immediately. For example, while tobacco taxes are known to be the most cost-effective tobacco control measure, countries encounter several challenges when a tax increase is at stake. Many countries have a complicated tax structure or a weak tax administration. Consequently, most are unable to monitor and analyze the market in order to increase their taxes, ensure compliance and achieve the main objectives of tax increases.sustainable higher revenues and higher tobacco prices

Furthermore, it is difficult to document the level of illicit trade and production, especially without having monitored the market and conducting appropriate analyses. As a result, without analytical evidence, the arguments for tax-induced illicit trade are often used against tax increase proposals. Increasing taxes should not be concentrated only on cigarettes, the most commonly used tobacco product. All forms of tobacco should be taxed. New tobacco products are evolving in different shapes and types, as well as tobacco products that have existed for many years in some countries

Smoking in public places was prohibited nationwide from 2 October 2008. There are approximately 120 million smokers in India. According to the World Health Organization (WHO), India is home to 12% of the world’s smokers. Approximately 900,000 people die every year in India due to smoking.the number of men smoking tobacco in rose to 108 million, an increase of 36%, between 1998 and 2015.

Present and future generations must be urgently protected from the devastating health, social, environmental and economic consequences of tobacco consumption and exposure to tobacco smoke.

Usage of tobacco is injurious to health.This one important thing is repeatedly saying by all social media.This article also gives that awareness too.