Why You Should Quit Smoking? 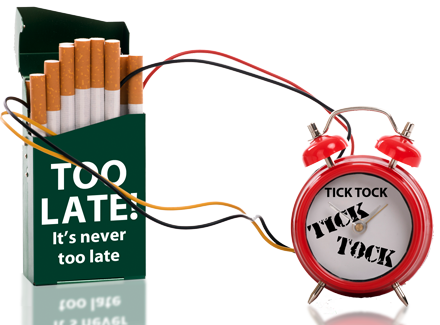 Every 6.5 seconds someone dies from tobacco use, says the World Health Organization. Research suggests that people who start smoking in their teens (as more than 70 percent do) and continue for two decades or more will die 20 to 25 years earlier than those who never light up. It is not just lung cancer or heart disease that cause serious health problems and death. Below, some of smoking’s less publicized side effects – from head to toe.

Smokers seem to be more likely to develop psoriasis, a noncontagious inflammatory skin condition that leaves itchy, oozing red patches all over the body.

moking is believed to cause or worsen several eye conditions. Smokers have a 40 percent higher rate of cataracts, a clouding of the eye’s lens that blocks light and may lead to blindness. Smoke causes cataracts in two ways: by irritating the eyes and by releasing chemicals into the lungs that then travel up the bloodstream to the eyes.Smoking is also associated with age-related macular degeneration, an incurable eye disease caused by the deterioration of the central portion of the retina, known as the macula. The macula is responsible for focusing central vision in the eye and controls our ability to read, drive a car,recognize faces or colors, and see objects in fine detail.

Smoking prematurely ages skin by wearing away proteins that give it elasticity, depleting it of vitamin A and restricting blood flow. Smokers’ skin is dry, leathery and etched with tiny lines, especially around the lips and eyes.

Because smoking creates plaque on blood vessel walls,decreasing blood flow to the inner ear, smokers can lose their hearing earlier than non-smokers and are more susceptible to hearing loss caused by ear infections or loud noise. Smokers are also three times more likely than non-smokers to get middle ear infections.

More than 40 chemicals in tobacco smoke have been shown to cause cancer. Smokers are some 20 times more likely to develop lung cancer than non-smokers.Smoking causes about 90% of lung cancers in men and 80% in women 5a and according to many studies, the longer one smokes, the greater the risk of developing cancers at several sites, including a two-fold risk of developing cancer

of the nasal and paranasal cavities 5b; cancer of the oral avity 5c (4 to 5 times); two-fold risk of developing cancer of nasopharynx; oro and hypopharynx (4 to 5 times); larynx (10 times); oesophagus (2 to 5 times); stomach 5d(2); pancreas 5e (2 to 4 times) and kidney 5f.Some recent studies have also suggested a link between heavy smoking and breast cancer 5g,and smoking cessation substantially reduces the risk for most of the above-mentioned smoking related cancers.

Smoking interferes with the mouth’s chemistry, creating excess plaque and yellowing teeth. There is some evidence that smoking contributes to tooth decay. Smokers are one and half times more likely to lose their teeth.

In addition to lung cancer,smoking causes emphysema, a swelling and rupturing of the lung’s air sacs that reduces the lungs’ capacity to take in oxygen and expel carbon dioxide. In

extreme cases, a tracheotomy allows patients to breathe. An opening is cut in the windpipe and a ventilator to force air into the lungs (see image). Chronic bronchitis (not shown) creates a build-up of pus-filled mucus,resulting in a painful cough and breathing difficulties.

the main poisonous gas in car exhaust fumes and cigarette smoke, binds to blood much more readily than oxygen, cutting the oxygen-carrying power of heavy smokers’

blood by as much as 15 percent. As a result, smokers’ bones lose density, fracture more easily and take up to 80 percent longer to heal. Smokers may also be more susceptible to back problems: one

study shows that industrial workers who smoke are five times as likely to experience back pain after an injury.

Smoking reduces resistance to the bacteria that cause stomach ulcers. It also impairs the stomach’s ability to neutralize acid after a meal,leaving the acid to eat away the stomach lining. Smokers’ ulcers are harder to treat and more likely to recur.

The tar in cigarette smoke collects on the fingers and fingernails, staining them a yellowish-brown.

Besides increasing the risk of cancer of the uterine cervix, smoking can lead to fertility problems for women and complications during pregnancy and childbirth. Smoking during pregnancy increases the risk of low weight babies and future ill health consequences.  Miscarriage is 2 to 3 times more common in smokers, as are stillbirths due to fetal oxygen

Smoking can deform sperm and damage its DNA, which could cause miscarriage or birth defects. Some studies have found that men who smoke have an increased risk of fathering a child who contracts cancer. Smoking also diminishes  sperm count and reduces the blood flow to the penis, which can cause impotence. Infertility is more common among smokers.

Buerger's disease, also known as thromboangitis obliterans, is an inflammation of the arteries, veins, and nerves in the legs, principally, leading to restricted blood flow. Left untreated, Buerger's disease can lead to gangrene (death of body tissue) and amputation of the affected areas.

Nice message to all people who adict on smoking.Smoking people must think about their family.