Importance of cursive writing in Schools 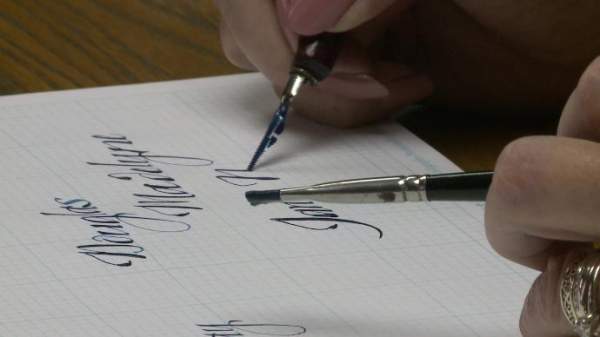 If you were asked to take notes right now, how would you do it? Would you grab a piece of paper and pen or pull out an electronic device?

Handwriting is a hot topic, especially when it comes to cursive and our kids. Some schools still require it; others have limited it or dropped handwriting instruction completely. In terms of school, students start making strokes as early as preschool. Then, in kindergarten, they officially learn their letters and numbers in manuscript. But, when does cursive come in?

Manier says kids will continue to practice from third grade on. She says sometimes in junior high they have a choice to switch back to manuscript if they like. But, with technology taking over the hands of kids at younger grades, should cursive even be taught? Manier says, “Yes!”

They have found that with cursive writing, because letters are connected, it really works against the letter reversals that happen so often with young children with the b's and d's and p's and g's, explains Manier. Her stance to support the teaching of cursive doesn't stop there.

There is a big argument for the reading of cursive. If you never learn it the chances of you being able to read it are much slimmer and that is a huge part of history that you are kind of eliminating there, adds Manier.

Anne Binder, one of the founding members of the Michiana Calligraphy Guild, has seen this first hand. Grandparents have come to me and asked me to teach their child, their grandchild, cursive because they want that child to able to read the birthday card that they send them, says Binder.

Both agree handwriting, whether cursive or manuscript is an important part of human development.

When you are writing manuscript or cursive, the same areas of your brain are activated as when you are reading and comprehending and those areas are not activated with a keyboard. Manier says younger kids aren't the only ones benefiting from handwriting. Studies are showing for older students, in note taking, those at college level perform better on tests taking notes by hand than typing them in,adds Manier.

To Binder, the art of handwriting is more than just development or college success. She says writing brings joy, pride and accomplishment. Words become more meaningful when you are taking them in from a written form, taking them into your brain, having it come through and out your hand. I think the hand, the heart and the mind, not to mention the eyes, understand that all of that is working together by writing, explains Binder.

Believe it or not, both say handwriting will make a comeback. Manier says some things are timeless. She says she feels there will be a push to go back to doing this by hand because of the way we learn and the way we write. Binder says you can already see it coming back by the adult coloring book fad happening right now. Adults are itching to take time away from the computer to simply color.