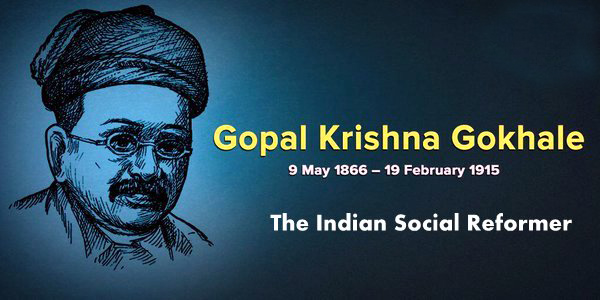 How many of you know about the great Indian social reformers?

Do you know who is Mr. Gopal Krishna Gokhalae?

Do you know what he had done to our Indian Nation?

Let's get on to the History.

Gopal Krishna Gokale, the Indian social reformer was born on May 9 1866. He was the political guru of Mahatma Gandhiji-the "Father of the Nation"Â and the founder of servants of India Society. He was one of the pioneers of the Indian National movement.
He holds great respect and values in bringing Independence to India. He was a senior leader of the Indian National Congress. The servants of India Society is an organization dedicated to the cause of common people.  Apart from being a political leader, he was a great social reformer who toils himself and supported millions of Indians who fought for freedom against british. It's damn sure that his contribution to the making of Indian nation is invaluable.

Gopal Krishna Gokhale was born on May 9, 1866 in Kothapur, Maharashtra. His father is Krishna Rao was a farmer and he swapped to work as a clerk as the soil of the region was not suitable for agriculture. His mother Valubai was a simple woman.
He did his early education at the Rajaram High School in Kothapur with the help of financial assistance from his elder brother. Later on he moved on to Bombay and graduated from Elphinstone College, Bombay in 1884 at the age of 18.

He was influenced by education.  His interest towards English led him to read and write fluently and express his thoughts and with utmost clarity. His appreciation and knowledge of history instilled in him a respect for liberty, democracy, and the parliamentary system. After his graduation, he moved on to teaching. He became the Assistant Master in the New English School in Pune. In 1885, Gokhale became one of the founders of Fergusson College, Pune  along with his colleagues in Deccan Education Society.  He became the principal of the college after spending two decades of his life. Meanwhile, he came in to contact with Mahadev Govind Ranade whom Gokhale called as his GURU. Ranade was a judge, scholar, and social reformer. Gokhale worked with Ranade in Poona Sarvajanik Sabha of which Gokhale became the Secretary.

He entered in to the public life in 1886 at the age of 20. He delivered a public address on "India under the British Rule", which was highly appreciated. Gokhale regularly contributed articles to Bal Gangadhar Tilak's weekly "Mahratta".  He became the prominent member of the Indian National Congress and twice elected as president of Pune Municipality.

The Servants of India Society:-

In 1905, Gokhale started a new society called "Servants of India Society". He trained workers for the service of the country. In the same year, He went to England to voice his concerns relating to the unfair treatment of the Indian people by the British government. In a span of 49 days, he spoke in front of 47 different audiences, captivating every one of them.

Gokhale toiled and pleaded for gradual reforms to ultimately attain Swaraj, or self-government, in India. In 1909, the Morley- Minto Reforms of 1909 was formed which eventually became law. The reforms spread wider and wider and their voices were more audible in matters of public interest.Gopal Krishna Gokhale was a diabetic and asthmatic. Due to major health problems, he died on feb 19, 1915.

When we make a non corruption as well as non bribe country , then only we give a tribute to this wonderful social reformer Mr. Gopal Krishna Gokhale. Thank u for sharing the history.