A guy from Chennai streets to Cambridge University 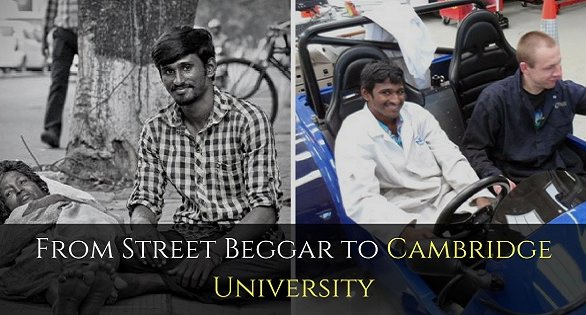 Here is the inspiring story of Jayavel, a 22 years old guy from Chennai streets who has cleared Cambridge University's entrance examination and got a seat in Glendwr University, Wales, United Kingdom to study Performance Car Enhancement Technology Engineering which deals in enhancing performance of cars. He has now headed to Italy for his further education.

About his early life:-

Jayavel's early life was troublesome as his family migrated from Nellore to Chennai in the 1980s after a failed crop season and with no source for earning a livelihood, the family had took to the begging on the streets in Chennai. Jayavel's father died when he was very young and his mother became an alcohol addict.

Turning point in his life:-

Turning point of Jayavel's life was when Uma and Muthuram (the couple who runs an NGO, Suyam Charitable Trust) met him and took care of his studies in the year 1999 by paying through the trust. As a part of the documentary on Chennai's street kids named Pavement Flower, the couple traveled to Kilpauk water tank area where they spotted Jayavel.

Initially Jayavel was playful and not interested in studies but after realizing that Uma had been striving hard to educate him, his attitude changed and he started working hard. As a result, he scored good marks in class 12. After which, few donors provided him loan for his higher studies and couple borrowed certain lakhs for his study in UK and Italy.

Jayavel wish to come back to India after his studies take care of his family and help couple in running the trust.